Saved by (which) bell?

“Now this is not the end. It is not even the beginning of the end. But it is, perhaps, the end of the beginning” – Winston S. Churchill

Exactly one month ago I wrote a mail to my friends and partners at CdR and told them, “This is real, and, we are already too late”. I was speaking about the illness we now know as coronavirus disease 2019 (Covid-19).

My status for certainty was both professional and personal: a career in insurance and mortality statistics; and living in Hong Kong with a young wife and child during the severe acute respiratory syndrome (SARS) epidemic of 2003.

Far more famous people had also warned of our unpreparedness. Bill Gates, whose Bill & Melinda Gates Foundation is now leading the way in global collaboration efforts, said, “If anything kills over 10 million people in the next few years, it is highly likely to be an infectious disease: not missiles, but microbes”.

This was a TED talk more than 5 years ago. A decade previously, Gates wrote “But the real story isn’t how bad H1N1 (Swine flu) was. The real story is that we are lucky it wasn’t worse because we were almost completely unprepared for it”.

What’s almost worse is we have not seen the worst yet, mainly because Western liberal democracies have not been selecting leaders based on likely managerial competence for some time. In The Fifth Risk, Michael Lewis articulated that the problem with the Trump presidency is a total disdain, and accidental dismantling, of exactly the apparatus of state that manages risks on this scale.

Dominic Cummings and Boris Johnson were just about to do the same thing in the UK. A coincidence that both Trump and Johnson disparaged experts as purveyors of ‘fake news’? And its not the first time.

Meanwhile, whilst our leaders are not leading or managing, our own ‘fibre’ is equally fragile: civic rights are all-encompassing but notions of civic duty are in freefall, as highlighted by Parisians ignoring the social distancing plea. 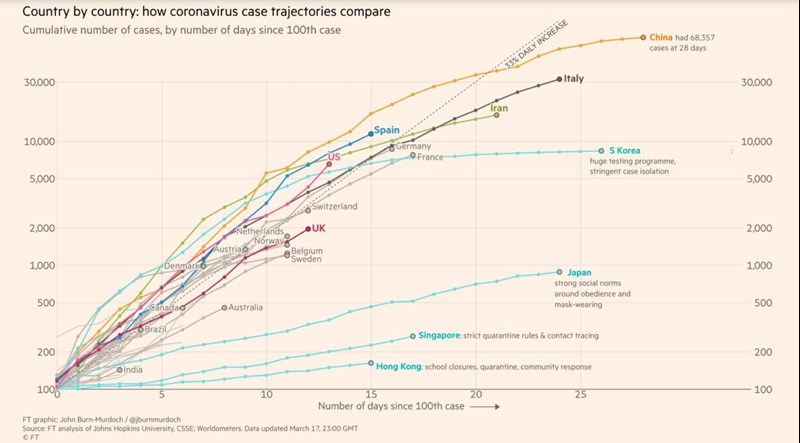 Just by looking at the Financial Times graphic above, it looks like the virus is likely to spread further and faster in Europe and America precisely because we are poorly led, unprepared and find personal discipline for the greater good a quaint and outdated notion.

The Asian approach—clamp down like a ton of bricks, ask questions later—works. The Taiwanese have done well as have Singapore and Hong Kong. Yes, Covid-19 may come back in the autumn, and these countries are very vigilant not to get a re-import of the virus, but autumn buys you time. China was late in implementing measures, but then it did so drastically. Expensive, but again, it has worked. The Chinese are now busy exporting their support and know how to Italy, where their standing is far higher than that of the EU. More on that further down.

Europe was slow and let Covid-19 spread into society. Looking at the different bell curves below its clear isolation works. The biggest mistake was not to clamp down on transmission and force isolation sooner. Europe's 'baseline' of cases is larger than even China's, and it’s now playing catch up. If in China they struggled to deploy enough medical support, Europe will be worse. 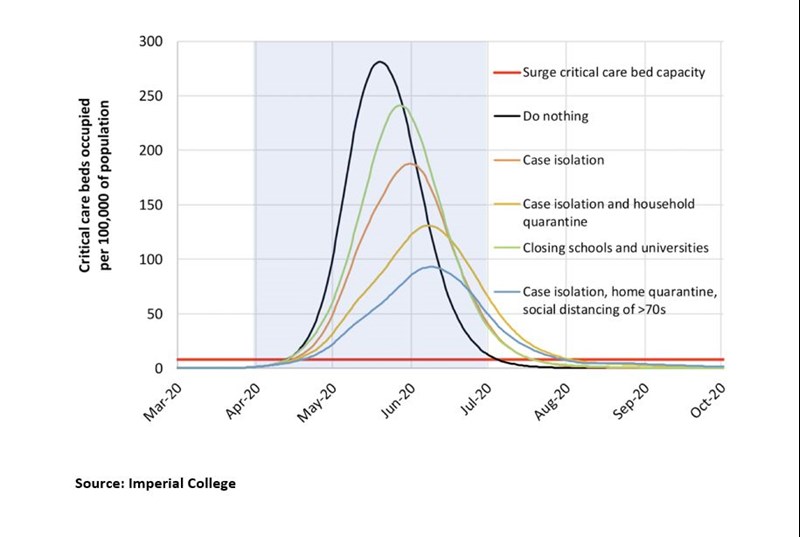 As Europe’s doctors repeat errors made in Wuhan, we can expect a large % of nurses and doctors not turning up for work. In the UK, we may have enough critical care beds in place in time—though by number per 100,000 inhabitants still half of those available in Italy—but we won't have the staff. The scenes will be ugly. France became the third European country on full lock down with Emmanuel Macron's approach—15 days strictly indoors—inspired and, if enforced, he may just be able to break transmission.

The US situation is worse still. Not only is Covid-19 in society but the US medical system is horribly inefficient and does not cover all the population. I would reckon that the US is behind even Britain if compared on a like-for-like basis and I cannot see the US implementing the French or even the UK measures on a nationwide basis.

The virus does kill—toll so far more than 8,000 globally—but the collapse in reaction capability by the medical system kills probably even more. No-one I see so far has focused on the long-term effects medically. There is evidence emerging out of Hong Kong of a reduction of lung capacity for the heavily infected—ones that go to hospital for Covid-19—by 20% to 30%. This, as an asthma sufferer, will tell you is a lot and reduces your quality of life/longevity markedly.

Or at least some better news. The coronavirus is sensitive to heat; although it is premature to hope that the summer will kill off broader transmission. With 564 cases in Australia, at the time of going to press, it is interesting to see that the Australian cases are pretty much all related to travel, particularly Asia.

Vaccines are 12 to 18 months away and in all likelihood that is next year's business. Nevertheless, whilst a vaccine may be a year away, the redirecting of global scientific and pharmaceutical resource to finding a cure may yield results far sooner.

So, where does that leave us? My best-case scenario in the west is a pretty traumatic Q2. Followed by a summer of relief, and hopefully a mad scramble to be ready for Q3/Q4 flare-up of a second wave. Worst case scenario is exhaustion of resources, patience, good will and trust in Western societies in the next three months.

In the meantime, and longer term, another prescient work was The Fourth Revolution: The Global Race to Reinvent the State. The authors, Adrian Wooldridge and John Micklethwait, posited that our current confidence in the traditional structure of a state was at an all-time low and that we needed a new model. Their poster child was Singapore. Look again at how Singapore has weathered this pandemic.

The virus has simply, but massively, accelerated some trends that were already in place: healthcare and medical technology as the new Tech 3.0; the (sudden) end of globalisation; the (also sudden) rise of teleworking and studying.

And the European Union? A complete and total failure to be relevant—abandoning Italy in its hour of need, and it’s most sacred shibboleth, open borders, rejected. As mentioned earlier, China is sending more effective assistance to Italy (in the form of masks, medicines and doctors) than the EU to which it contributes.

Sadly, the pandemic is also acting as a case study in endorsing less-than-democratic-societies, if you look at the infection, detection and recovery rates in Singapore, Japan and China. Some (in the US) even fear it’s another nail in democracy’s coffin. Finally, it has exposed Trump, probably fatally (and with it, shares in Twitter). Democrats “do” healthcare and I suspect state spending on THAT is suddenly going to matter a lot.

And the markets? They’ve had the worst day since the stock market crash of 1987, but it’s not too late to get defensive. Some industries just won’t make it and the triage principle will apply to government rescue efforts as well as to citizens. For longs, be very selective: long China, Korea, Australia; and a little Latin America.

In the short term there are sectors that are benefitting from the impact of the coronavirus, while for longer term investors, it’s time to start preparing a portfolio of dominant, sound, world-class companies, whose prices may already be 50% lower.

As for alternatives, insurance strategies are perfectly uncorrelated and a true ‘hedge’. And, for those who believe that the future of investment is ‘quantamental’, any systematic strategy that has survived an event that featured nowhere in its data-sets must be a good bet, too.

Our lives are currently being ruled by statistics. Yet in March, we were as likely to die of Covid-19 by biking for seven miles across a large city or by being hit by an asteroid over a lifetime. What is all this fear doing to our minds and the markets?

Hugging is potentially lethal and we clap hospital heroes from our homes, many of us realise we have taken the funding and efficiency of our healthcare systems for granted. But health, its data and delivery is changing. What is the future of healthcare?

“Everything depends on the people in the labs. New discoveries in fields such as biotechnology and nanotechnology could create entire new industries” ― Yuval Noah Harari. Bread, beer, acetone, penicillin and yoghurt are derivatives of living organisms.